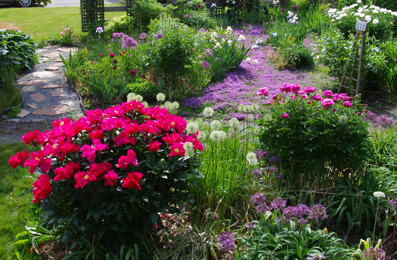 A plethora of peonies greeted Region VII members at the 12th Annual Oshawa Peony Festival on June 12. With more than 300 varieties in colors ranging from pure white to pink, yellow, coral, rose and deep red, the outdoor collection of herbaceous and Itoh hybrid peonies at the Oshawa Valley Botanical Garden was truly impressive. The indoor judged display of hundreds of cut blooms was equally as charming.

All this beautiful display began in the fall of 2001 when the Canadian Peony Society donated 100 plants from the Wally Gilbert Collection to the project. This contribution led to the official launch of the Oshawa Valley Botanical Garden (https://www.oshawa.ca/things-to-do/oshawa-valley-botanical-gardens.asp) and the beginning of the Peony Festival the following June. Further donations from peony breeders and suppliers across North America helped the collection flourish into the largest contemporary collection of peonies in North America.

The succession of blooms begins in late May and continues through to the last week of June. The Annual Peony Festival coincides with the climax of the bloom cycle in June.

GWA Region VII members came from as far away as Montreal, Toronto, Muskoka and St. Catharine’s to attend the Festival. Afterward we gathered for an informal networking lunch in the Whitby, Ontario garden of Region VII National Director Ken Brown.

Ken and his garden had been featured just a few days before in The Toronto Star. The article described his experiments with vertical gardening. For example, in Ken’s garden butternut squash grows beneath a lilac tree where it climbs up the trunk. He also has tomatoes twining around and up ropes and cucumbers growing on a wooden trellis pyramid.

The gathering was a great success for those attending. The combination of a morning enjoying the Peony Festival followed by an afternoon of networking at Ken’s home provided a wonderful opportunity for networking with fellow members.

Lorraine Hunter is a Toronto freelance writer/editor. She was editor of Plant & Garden Magazine and has been published in such magazines as Gardening Life, Canadian Gardening, Canadian House & Home and Woman’s Day Garden and Deck Design. Her work has also appeared in the Toronto Star, the National Post and on various websites.

A former member of the Board of Directors for the Toronto Botanical Garden in Toronto, Lorraine is currently chair of its Trellis newsletter committee and also writes feature articles on gardening for that publication as well as a blog titled Botanical Buzz.