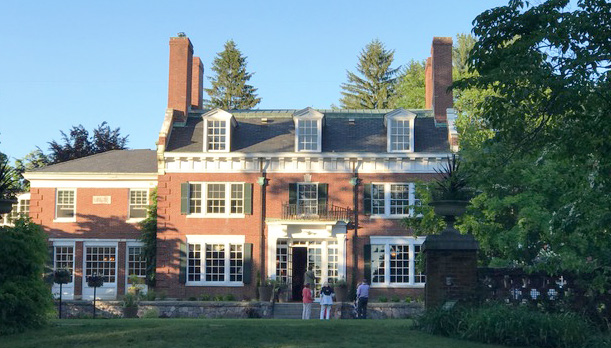 GWA Region I began our “Harvard Yards Garden Tour” at the Hunnewell Building at the main entrance of the Arnold Arboretum. Having parked at the opposite end, I made my way uphill, which allowed for some exhilarating exercise and grand views I would have otherwise missed.

Nancy Rose, editor of “Arnoldia,” the arboretum’s quarterly magazine guided us at a fairly brisk pace through a short loop of the grounds. As we walked there were several interruptions from airplanes flying overhead from the Logan International Airport.  Nancy told us there is a study underway to discern the effects of pollution on the habitat below the flight path. Along the way, she drew our attention the unusually smooth lower bark on a gigantic silver maple (Acer saccharinum). She told us it got that way due to its popularity among visiting tree huggers exchanging energy with the specimen. Most of the arboretum’s specimens were started from seed, usually from three diverse sources. The Arnold was the recipient 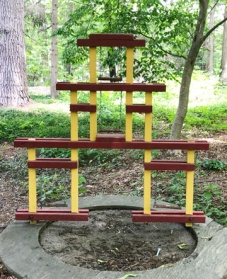 of some of the first seeds from China of the prehistoric dawn redwood (Metasequoia glyptostroboides) at the end of World War II.

Eventually we arrived at the Bonsai & Penjing Collection, which is so rare, it is wired and surveilled. The collection began in 1937 with a donation of 30 bonsai plants. It has since slowly grown to the present collection of 35 specimens.

After the walking tour Director Ned Friedman gave us stimulating presentation of “Tales of Obsession in the Arnold Arboretum.” His lecture was peppered with quotes from Goethe, a favorite philosopher of his. We learned that ‘naked buds’ are exposed to every kind of weather winter can throw at them and still look great come spring. He also showed slo-mo videos of the exciting release of pollen (i.e. viscin threads) by a rhododendron flower. They appear similar to diamonds attached by silvery threads, slowly unfurling.

Next we travelled to the Wakefield Estate where we enjoyed a delicious lunch on the expansive porch of the Manor House (1794). The 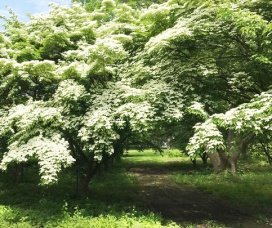 Wakefield Estate has been in the same family for three centuries. Allées of Kousa dogwood (Cornus kousa) intersected the garden. Originally lined-out as seedlings, staff gardeners must constantly thin out the branches to allow enough light for their future growth. Mary Wakefield was a patron of the Arnold Arboretum and was sent many of these seedlings. We also saw two impressive specimens of lacebark pines (Pinus bungeana). One recently lost a major limb due to heavy snowfall this far north.

After a trunk show in the parking lot was cut short by a thunderstorm, we were whisked off to The Bradley Estate in Canton. There we were treated to light refreshments while a harpist playing until the rain subsided. Under an elegant portrait of Mrs. Bradley from the 1920’s, we listened to a brief history of “Trustees” and how they go about preserving these properties to create a viable future. We then had guided tours of the 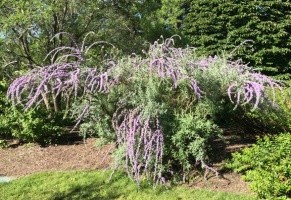 After the tour Proven Winners presented a background of their company, which employs just a handful of employees. They showed us pictures of Mackinac Island where prominent displays of their trademark plants were used. Finally the Proven Winners staff passed out ‘Lemon Coral™’ sedums and ‘Invincibelle Limetta®’ hydrangeas, a fitting end to an amazingly informative day. 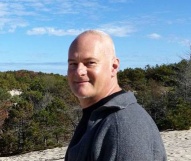 Gerald Simcoe is a gardener who grows the flowers he paints. He maintains a studio on Sanibel Island and one in a repurposed Pennsylvania German ramp barn in the Lehigh Valley. While studying at Longwood Gardens, Simcoe has been the estate gardener for Ambassador Annenberg in Wynnewood, PA. Learn more about Gerald at http://www.geraldsimcoe.com/.