A gathering of Garden Writers is always a treat, regardless of the geographical location, the season, or the weather. At the recent Region III meeting in Indianapolis long-time acquaintances smile broadly and open their arms to hug fellow writers as they enter the room. “Where have you been recently?” How’s the weather been for you?” “Are you going to Buffalo?”

After shaking off rain jackets and stowing umbrellas, attendees collected their box lunches and pulled chairs into small circles to visit as they ate in the conference room at

Holliday Park. I was fortunate to sit with two first-time attendees, assuring them they were in for two days of whirlwind garden visits, networking, and information.

As the downpour continued, we were content to sit inside for a presentation on the history and evolution of “The Ruins,” the façade of a building formerly in New York City, and moved to the park. Recently, The Ruins have been renovated to make them safe for visitors. During the renovation thoughtful gardens had also been established around them. The Ruins reopened in the autumn of 2016, providing a space for park visitors admire the gardens and to stroll down a tree-lined allée to a rain garden. Once the presentation ended, the rain stopped so GWA members hurried out to see “The Ruins,” cameras in hand.

Next on the agenda were plants…lots of plants donated by various companies for GWA members to trial. First-time attendees’ jaws dropped when they realized they didn’t get just one plant, but one of EACH variety! There were hydrangeas, sempervivums,

calibrachoa, rose bushes, ninebark, Asiatic lilies, and eucomis bulbs. In addition, a table of seed packets was available. I was at the end of the line, but there was still a nice selection. I chose edibles:  ‘Mini-Love’ and ‘Gold In Gold’ watermelons, ‘Red Candlesticks’ okra, and ‘Mad Hatter’ peppers.

After carefully packing away our plants, we packed ourselves into as few cars as possible, being cautioned by our fearless leader, JoEllen Meyers Sharp, that parking would be extremely limited. Our first stop was only minutes away at a newly renovated garden that featured an antique gazebo and even older Chinese dogs made of white marble, inviting visitors to stroll the paths along perennial borders. Back into the cars for a very brief ride to an elaborate shade garden stoned into the side of a steep slope with curving paths, and serene sitting areas. I didn’t count 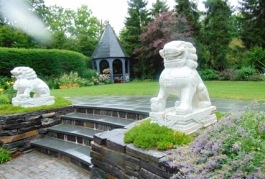 the hostas, but there were hundreds. Several metal sculptures added a touch of whimsy to the gardens. The fourth garden of the day included a 2-acre prairie alive with pollinators, and a dream of a children’s garden. We all were tempted to walk over the tunnel, and a few even ventured up the log steps into the rustic wooden fort.

Our final destination was an estate that could have been in Europe rather than Indianapolis, with parterres, elaborate hedges, and an English mixed border that 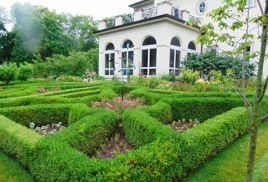 surprisingly doubled as a rain garden. It was being put to the test during our visit, with over 12” of water covering many of the plants. The 2 acre garden was immaculate and filled with color, even though its owners wasn’t there, preferring to spend time at their second home in Maine during the summer months. Even if I were rich enough to have a second home, I wouldn’t want to leave such a beautiful garden.

So, we traveled from “Ruins” to gardens of the “Rich” with some wonderful stops between. But the most wonderful part was being able to share it with like-minded writers from neighboring states. Friendships were renewed, and new ones made. And that is a big part of what GWA is all about!

Carolee Snyder formerly owned and operated one of the Midwest’s largest retail herb farms, with numerous display gardens, including a U-Pick field of lavender. She is the author of four herbal novels, as well as many articles. She can be found online at Herbalblessingsblog.wordpress.com and at www.caroleesherbfarm.com. She lectures, teaches, and travels to promote and share her love of herbs and gardening.

2 thoughts on “From Ruins to Riches in Indianapolis”