In a large conference room at the hotel, there was a panel of four speakers, including a local micro influencer, a mother of a 7-year-old asthmatic child. She never intended to be a micro influencer. She just wrote a blog about parenting a child with asthma. The panel discussed how micro influencers are not celebrities but have the same power to influence us in what we do and what we think.

Micro influencers are authentic. They genuinely know what they are talking about and they write about what they think and what they do. If they are a micro influencer to us, then their messages are resonating with us – their messages are useful to us. They feel like a friend or a family member and become a trusted resource. We follow them on social media because we want to hear what they have to say and believe in what they have to say. Last year, for example, this mother on the panel was outraged at the high EpiPen prices and wrote about it on her blog. She touched a nerve. She was trending, and she mobilized others to pay attention and to reject the high prices.

A woman from the audience who works at the Centers for Disease Control and Prevention (CDC) came up to the stand-up mike and asked the panel how she should identify and work with micro influencers in her job to prevent diseases from chickens. She said that there has been an increase of homeowners buying chickens yet these homeowners are unaware of the health consequences. They buy the chickens because they are cute and they feel they are getting back to nature. But some may be unaware of diseases which can be transmitted to humans via “chicken poop” – yes, she actually said the word.

The four members of the panel, who must have not been gardeners, thought she meant farmers or farms, not backyard chickens. They suggested she search on the internet with such keywords as “Atlanta” + “blogger” + “chicken.” After finding someone who writes about chickens, she would have to further research the person, read the posts, and maybe contact the person. Of course as a CDC employee, this woman would be able to provide the data to the influencer and ask if the influencer would be interested in communicating the health issues. The panelist with the asthmatic child said she does not have chickens but she knows someone who does and this topic interests her as a public health concern. She added that if she were to receive information on this, she would pass it on to her friend.

Of course I wanted to walk up to the stand-up mike and tell the CDC employee that if someone has backyard chickens, it is highly likely that person is also a gardener. There are many gardeners who are garden communicators; GWA members in fact. I would have whipped out my GWA membership card (so she would not think I was crazy), explained to her that there are many chicken owning, garden communicators who may be interested in telling their followers about the health hazards. They would not even have to write much, all the information is on the CDC website. I myself do not own chickens but I “follow” and “read” many garden communicators who regularly post about owning backyard chickens on social media.

But I did not say anything as I was attending as a federal government employee. I kept an eye on her as she walked back to her seat so I could talk with her afterwards as a GWA member. Unfortunately I lost her when the session ended and everyone left for lunch. I know, it was a missed opportunity but it also provided new insight for me as a garden communicator.

GWA members are micro influencers. We talk about gardening to a group of people via social media and in person. We have our followers on Facebook, Instagram, and Twitter. We have our tribe who read our blogs and our books. We have people who even pay to hear us speak at lectures and workshops. Why? Because we, as garden communicators, are telling a story on Facebook, Instagram, and Twitter, to our “friends.” Micro influencing is really the same as storytelling, only the new campfire is the smart phone. 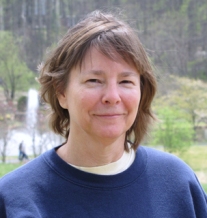 Armed with a horticulture degree from Virginia Tech University and a position in a public health agency’s communications office, Peggy Riccio has been involved in horticultural communications for more than 20 years. After writing over 70 articles for gardening magazines, Peggy launched her website, pegplant.com, which features local gardening news, resources, and plants for those who have started gardening or who have moved to the Washington, D.C. metro area.